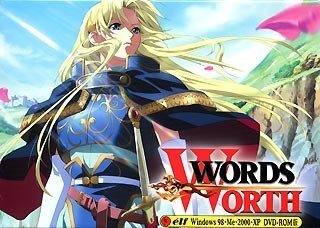 Here we go with another classic game, but this time I would like to share the first Windows version of this one, made for Windows98 back in 1999.
Elf is very known for making titles like Nonomura Byouin no Hitobito (野々村病院の人々, 1996[Windows ver.]) and the already known by some people and appreciated titles like Kono Yo no Hate de Koi o Utau Shoujo YU-NO(この世の果てで恋を唄う少女YU-NO, 2000[Windows ver.]).
So more or less you know what I am talking about here, enough with the introductions, maybe for other time more details will go on this website.

Now back to Words Worth, got first released for the NEC PC-9801, SHARP’s X68000 and Fujitsu FM-TOWNS back in 1993, until it made the leap to Windows 98 in 1999, and subsequently on Windows XP in 2004.
Everybody knows already the fact that a ‘Professional’ translation group called Fun Translations released a patch for it and was the only game from that company that got ever cracked and release on the net.
So don’t ask for the other patches or the one for Fortuna {フォルトゥーナ} (Zyx , 2001) because I don’t have them.

Thanks for your comments and also for reading at NemuVN, another new resource for old and past Visual Novels to make everyone feel them still as fresh as I think they are.
And don’t ask for any other Fun Translation’s patches, just to remind you, ahaha!
Rockleevk

Too old for you?